Have you been charged with Hyper Grace?

Charisma Magazine recently published an article entitled “8 signs of hyper-grace churches.” Using words like “decline” and “distorted” and “sexually immoral” the article argued that churches built on the message of “free grace” are part of a “dangerous trend” that needs to be opposed and confronted.

What does a hyper-grace church look like? According to the article’s author, a hyper-grace church is one where the pastor only preaches positive messages, doesn’t insist on tithes, and key members of the church are living in sin. Hyper-grace churches are also known for promoting immoral people into positions of leadership, and by refusing to engage in culture wars, they are effectively condoning abortion and the killing of babies.

Honestly, for spouting such libelous nonsense it’s a wonder Charisma Magazine hasn’t been sued into bankruptcy. That they haven’t surely speaks to the good grace and patience of those they slander.

In the interests of balanced reporting, I thought I might offer eight more-accurate signs of a hyper-grace church. But first, what is “hyper-grace”? Those who attack it rarely say. The author of the above article makes no attempt to define it but acknowledges those who preach it place “strong emphasis on grace.” To this I respond, guilty as charged. Grace saves us, grace keeps us – it’s grace from start to finish!

So what’s the problem?

The problem, apparently, is we’re not preaching enough law. We’re antinomians with insufficient regard for the moral law of the Old Testament. In the Charisma article, the word “grace” appears nine times but the word “law” appears thirty times. This indicates a strong emphasis on the law.

The author writes, “The Law doesn’t save us, but it sanctifies us.” The grace of God gets us into the kingdom but it’s our observance of the Law – with a capital L – which keeps us there, or at least keeps us from upsetting a temperamental God who is intolerant of our sin.

Consequently, we may contrast the two perspectives as follows:

With these distinctions in mind, we can now identify eight characteristics of hyper-grace churches:

1. They preach Jesus and nothing but Jesus

Hyper-grace churches agree with Spurgeon who said, “A sermon without Christ as its beginning, middle, and end is a mistake in conception and a crime in execution.” They understand that what this rule-obsessed world needs is not more rules but a revelation of the One who fulfilled the law on our behalf.

In a quest for holiness a mixed-grace church may preach a little law, a little self-help, or a little pop psychology, but it’s all just a flesh trip. In contrast, a hyper-grace church preaches Christ alone. Whatever your need, whether it’s salvation or sanctification, your supply is found in the One who promises to meet all your needs according to his glorious riches in Christ Jesus Phil 4:19You don’t need seven steps or fifteen keys or an intensive course of study. Your greatest need is for a revelation of Jesus Christ and what he has done on your behalf.

2. They reveal a God who loves you like a Father

Hyper-grace churches understand that what an orphaned world most needs is a revelation of our heavenly Father who loves us and cares for us and desires for us to come home. They follow the lead of Jesus who spoke again and again of “Our Father in heaven” (Matt 6:9). They understand that everything good in life is built on the revelation that “My Father loves me more than I know,” and that this is the revelation that will change men and close abortion clinics and end culture wars.

A mixed-grace church, in contrast, seeks to balance this “teaching” with old covenant pictures of God as judge, jury, and executioner. They say, “Yes, he is a God of love but he is also a God of justice,” as though God’s justice could somehow be understood apart from his love.

The best picture we have of God’s character is not found in a list of ancient laws handed down to a wandering tribe of ex-slaves. It is Jesus Christ. “No one has ever seen God, but God the One and only, who is at the Father’s side, has made him known” (John 1:18).

3. They esteem the words of Jesus

A common misperception is that hyper-grace churches disregard the teachings of Jesus. In point of fact, hyper-grace churches are the only ones taking Jesus seriously. When Jesus is preaching law, we say that’s serious law and when Jesus is revealing grace, we bow in breathless gratitude. We would not dare to re-interpret his words with qualifiers and caveats.

In contrast, those who preach mixed-grace dismiss the hard words of Jesus as hyperbole and exaggeration. “Jesus didn’t mean what he said about chopping off limbs or being perfect.” Like the Pharisees of old, a mixed-grace church picks and chooses those commands which are to be followed while disregarding others as metaphorical, unreal, and not to be taken seriously.

4. They esteem the law and the purpose for which it is given

Hyper-grace churches are often accused of being opposed to the law when, in fact, they esteem the law and agree with Paul who said “the law is good if one uses it properly” (1 Tim 1:8). They understand that the “law is made not for the righteous but for lawbreakers … and those who oppose the glorious gospel of the blessed God” (1 Tim 1:9-11). The law is for those who trust in themselves and their own righteousness rather than in Christ and his.

A mixed-grace church promotes the law as a guide and standard for righteous living. Under this perspective grace is reduced to little more than a lubricant for greasing the cogs of self-effort. Ironically, those who live this way reveal their disregard for both law and grace – law, since they cannot keep it yet pretend to, and grace, since they would rather trust in their own efforts than in Christ’s finished work. Such a church is lukewarm. They are neither submitting to the cold and unbending demands of the law or the white-hot love and grace of their Father.

5. They understand that obedience is a fruit not a root

A mixed-grace church says you must obey God commands in order to prove your love but a hyper-grace church takes Jesus at his word: “If you love me, you will obey what I command” (John 14:15). They understand that obedience is not birthed out of fear but love. Those who are resting in the unconditional love of their Father will trust him and do what he says without any conscious effort. They don’t need rules to tell them what to do for the Holy Spirit himself is their guide (John 16:13).

Jesus said, “As the Father has loved me, so have I loved you. Now remain in my love” (John 15:9). The issue is not whether you will do what he says, but whether you will remain in the quiet place of trust, resting in his love. If you don’t settle this in your heart – that Jesus loves you as the Father loves the Son – you may run from your husband Mr. Grace back to your former husband Mr. Law (Rom 7:1-6). Someone who tries to mix law with grace is a spiritual adulterer. They’re cheating on Jesus. While they may appear to be religious on the outside, their hearts are full of unbelief.

6. They empower people to overcome sin

If you sin, a hyper-grace church won’t throw stones or shame you. Instead they will point you to the living Grace of God who dealt with all your sins on the cross. They will say with the apostle John, “If anybody does sin, we have one who speaks to the Father in our defense—Jesus Christ, the Righteous One” (1 John 2:1).

A mixed-grace church would have you turn from every sin until you’re a dizzy sinner. But a hyper-grace church will release the supernatural grace of God that empowers you to sin no more. They will do what Paul did with the sinning Corinthians and reveal your true identity in Christ. You are “sanctified in Christ Jesus… I always thank God for you because of his grace given you in Christ Jesus. In him you have been enriched in every way (and) he will keep you strong to the end, so that you will be blameless on the day of our Lord Jesus Christ.” (1 Cor 1:2-8). We are not changed by our resolve and sheer determination. We are changed by beholding Jesus who lives within us.

7. They promote security and trust

Hyper-grace churches promote faith and confidence by proclaiming the promises of Jesus: “My sheep listen to my voice; I know them… no one can snatch them out of my hand” (John 10:26-27). We don’t stand on our promises to him, but on his many good and great promises to us. Rest, be at peace, for it is God who keeps you firm to the end. The One who holds the universe in his hand, can surely hold you!

But in mixed-grace churches, your standing is based on your promises to God rather than his promises to you. Let God down and you will need to make new promises and work harder to keep them. Where is the security in this? There is none. No guarantees are offered or even desired for a measure of uncertainty is seen as an essential for keeping the sheep in line and under control. This way lies misery and despair.

A hyper-grace church is attractive to sinners and unappealing to the self-righteous. It is a place where the prodigals come home and the zealots stay out. It is a family where the broken are made whole, the captives are freed, and all are loved. It is the City come down, it is heaven-on-earth, and it is God’s best advertisement for the kingdom of his grace. 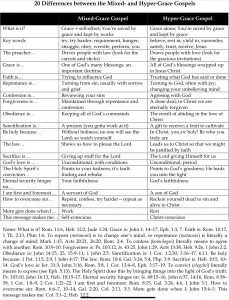