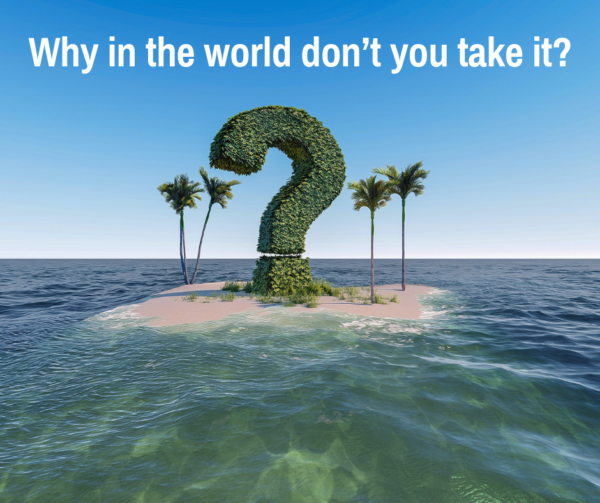 A reader told me about a January 7 Insight for Living broadcast in which Chuck Swindoll talks about the time when Moses lifted up the bronze serpent, and those who looked on it were healed of the plague (Numbers 21). I just listened to the section in question, and it is fantastic. You can hear that message here by clicking on Part 3 (“Hope Beyond Snakebite”). I especially suggest you listen from 5:30 to 12:00. In that six and a half minutes, Swindoll clearly and concisely presents the promise of everlasting life by faith alone.

After saying at the 6:21 mark that those who looked lived, he states, “There was no issue made of Lordship looking. Some of you are saying, ‘What?’ Others of you got it. There was no, You need to be spiritually sincere when you look. Or, You need to look for the next three hours so we know that you really have determined that you are really going to look. Just look! Just look! ‘Cause all the other stuff is too subjective.”

Swindoll then takes the audience to John 3:14-15 in which Jesus cites the uplifted serpent while evangelizing Nicodemus. Swindoll says that Jesus told Nicodemus, “All you have to do is take the gift. Believe” (8:40).  Swindoll said that Nic responded, “Believe? That’s all?” (8:50).

He continues, “A lot of people want to buy Him (Christ). They want to earn Him, because, you know, there is no free lunch. I know one. It wasn’t free to Him. It cost Him His life, but He’s given it to you. Why in the world don’t you take it? How many people will step into eternity without Christ, spend hell there for the rest of their lives, realizing then I made it difficult. I didn’t take Him at His word that whoever believes will in Him have eternal life. I love it!”(11:19-12:00).

I highly recommend this broadcast. Chuck Swindoll did a terrific job. Two of his seminary professors, Charles Ryrie and Zane Hodges, would surely be very pleased to hear this. More importantly, the Lord Jesus Christ was and surely is well pleased by what Chuck Swindoll said that day.

It is so encouraging to hear well known speakers proclaim the clear message of life. When it happens, we should take note and rejoice.

Grace Is Approachable
Is Lordship Salvation a Saving Message?
Can We Be Sure in This Life That We Will Rule with Christ?
How Does Satan Work?